We've had some big new developments this week, as the pups continue to mature at an amazing rate.

The pups and mom have graduated to 'the big pool'- as the small wading pool had gotten way too little, and they could easily climb out.  So now they've got a super-sized pool in the bedroom, and another in the living room - giving them lots of room to spread out.

Plus, as you'll see from the pictures below, we've started the pups on their litter box training, and after a few days of mayhem, they're starting to get the hang of it already and are climbing into the boxes to do their business on their own (at least some of the time)!  This method has proven really helpful in overall potty training with us, and as they go to their new homes.

The other big news is that the pups are beginning to be weaned gradually to solid foods.  They still get most of their nutrition from mama's milk, but they've cut their first sets of little teeth, and their digestive tracts are mature enough to begin some solids.

Their first actual meals are ground up raw chicken quarters and backs - to supply a good mix of protein and calcium, but we're also letting them 'eat' (read: gnaw on, fight over, roll around in) some raw chicken necks - to satisfy their need to chew as they teeth, and also to give them something to think about.  As you'll see from their pics, they LOVE both the grind mixture and their necks.  They took to the raw diet like little fish to water!

Because of all of the issues with dog food recalls and the diet-related heart-issues that are popping up, we're becoming even stronger advocates of feeding our whippets the natural way, and also coaching others on how much healthier this is (as well as how to make it human-safe, and hassle-free). 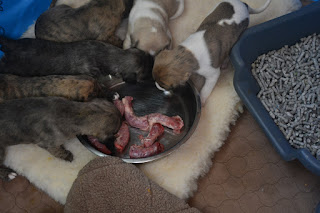 First try at chicken necks.  They dove right in, like they'd been eating this way forever.  This is fascinating to me, as this is only the second litter I've raised on raw;  back when we used to wean to commercial dog food, we always had several in each litter who wouldn't eat for the first week or so.  But with the raw food, they just take to it like the little carnivores/omnivores that they are. 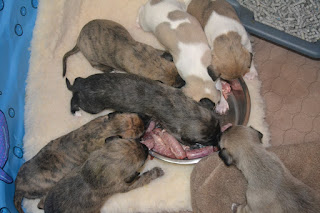 Clockwise from top:
Gorgonzola, Colby, Fontina, Gouda, Brie, Pepper Jack (who decided the best way to eat was to climb ALL the way into the bowl), Stilton. 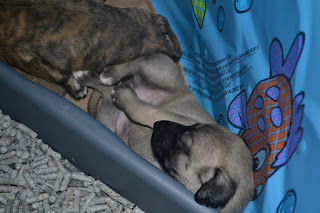 Fontina...she loves to sleep on her back...wedged up next to the litter box. 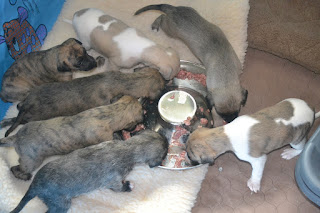 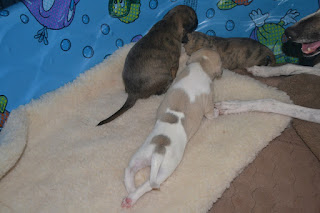 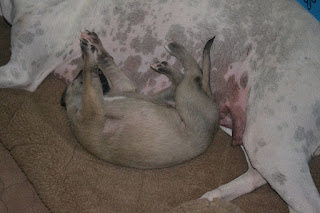 Silly Fontina, flirting with her mama. 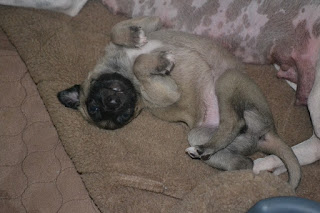 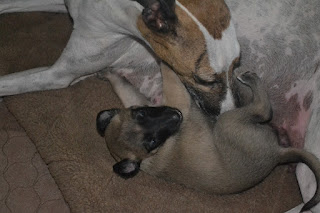 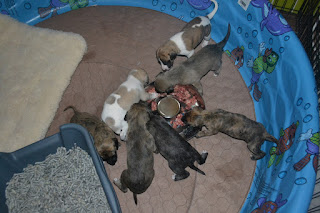 More mealtime!   In just a day or two, the pups know the sight, sound, and smell of real food.  When mama Lychee is eating, they start yelling to be fed too!
Clockwise from top:
Colby, Fontine, Brie, Pepper Jack, Gouda, Stilton, Zola.