We've gotten a whole bunch of pics of our past puppies, so time for another update post:

First up, Huge Congratulations to Misu (HT Tiramisu Frangelico) and her mom, Linda on their first Rally competition.  Not only did Misu finish her title, she was also in the ribbons each day, AND tied for top 5 highest score.  Good job, Linda & Misu! 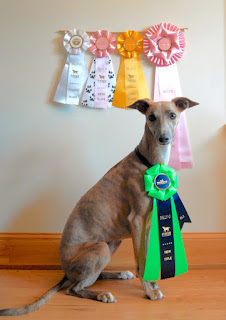 In fact, Misu's recent wins reminded us that we'd like to add a new page to the Horsetooth Whippets Website - a brags page for all of the pups bred by us.  So, we've added all of the titles, awards, and points we know of - do let us know if we've missed anyone.  Here's the link to the new brags page:
http://www.horsetoothwhippets.com/Bred-by-Titles.html
We've also added a 'key' at the bottom of the page to decipher all those letters before and after a dog's name.

Next up, we've got Ez (HT Esmerelda Villalobos) crashing early after a long day of remodeling.  It's a shame she has such a tiny, cramped place to lay her weary head.  :) 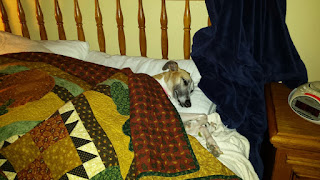 Next up, we've got Larry (HT Larry's Wonton Takeout) celebrating his fourth birthday with a special treat.  His little buddy, Bella the IG is sure interested in sampling the cake! 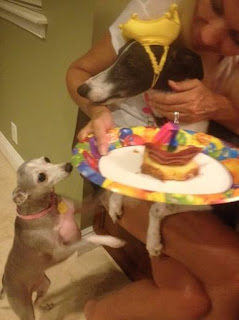 Next up, we've got some great shots of Zola' (HT Into the Mystic) and Rufeus (HT Pesto Di Noce):

Next up, we've got Pip (HT Auric Goldfinger), snuggling his best friend, Twiggy!

Next up, we've got Upson (HT Upson Pratt) - crashed out under the coffee table on his first night in his new home.  He won't fit under there for long! 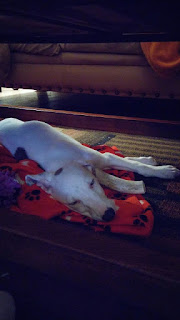 Next up, we've got Oliver (HT Duke Henry the Red) - also on the first day in his new home, making buddies with his new sister.  She looks thrilled.  :) 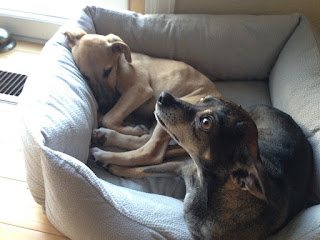 Last but definitely not least - a play date for 2 of our puppy families!  Elway (HT Ernst Stavro Blofeld) had a visit with Fabienne (HT Fabienne's Blueberry Pancakes) and Apoc (HT The Matrix's Apoc).  Looks like a fun whippet-wrestle-fest: